A GenXer Reacts to VidCon 2015

For our summer vacation this year, more than anything in the world, my 12-year-old daughter wanted to go to VidCon. She has been planning this event since before Christmas.

For the uninitiated and/or those not part of Generaton Z (a.k.a. iGen), VidCon is an annual convention for YouTubers and their rabid fans. It was started five years ago by the VlogBrothers, a.k.a. Hank and John Green, the latter who is the author of The Fault In Our Stars, Paper Towns, and other acclaimed teen novels. They started with about 1,400 attendees; this year’s attendance was estimated at 20,000.

If you’re old like me, you might be asking, “What is a YouTuber?” “What’s a vlogger?” “Where did I leave my car keys?” YouTubers are people who create video blogs/diaries (vlogs) on YouTube. They are also known as “creators”. As far as your car keys, have you checked the fridge?

While many are aspiring singers, actors, or comedians, these folks have become insanely famous mostly for sharing about their lives. Some are funny. Some have inspiring stories. Many of them already have book deals. Miranda Sings‘ (real name Colleen Evans) book, Selp Helf, just came out July 21 and is already #19 on Amazon’s best seller list. Tyler Oakley’s book, Binge, is due out on October 20, and is already at #25.

So here is this elder’s takeaways from VidCon 2015:

YouTubers are huggy. At least with each other.

A big complaint is that iGen-ers are completely antisocial. They sit in rooms, sometimes alone, sometimes with each other, silently playing games, texting each other and checking Twitter and SnapChat on their smartphones or tablets, instead of interacting with each other, or playing outside catching fish in the creek until Aunt Bea calls them in for supper.

Yes, VidCon was filled with hoards of teenagers glued to their electronic devices. However, as we wandered around the Anaheim Hilton (THE place to be, BTW). a lot of people had “Free Hugs” signs. Note: Not unlike high-waisted pants, this is only cute if you’re a teenager. It is just creepy if you’re over 40.

At one point, my daughter let out a squeal and started running toward a gangly teenager with puppy dog eyes who looked vaguely familiar. He seemed to recognize her, and they warmly embraced. I thought maybe it was some kid from her school, but she introduced him as Ben J. Pierce, an up-and-coming YouTuber. 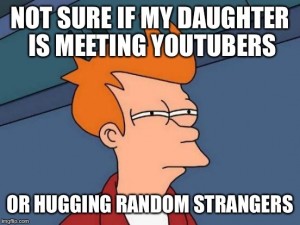 This the the same girl who was so shy about hugging her 90-year-old great aunt a few years ago. Maybe if Aunt Sonia had a YouTube channel, my daughter would have warmed up to her faster. But I get it. I was once a teenager too, back in the Mesozoic Era.

Many YouTubers, like Oakley, Joey Graceffa, Troye Sivan, Ingrid Nilsen, Hannah Hart, and others are openly gay and share their coming out stories with fans. But being gay doesn’t narrowly define who they are, like it did when I was a teenager and had friends who were terrified to come out to their parents and friends. We all knew. And I think they knew we knew. But no one dared to talk about it.

Today, it’s kind of like, “Yeah, whatevs. And I like vanilla instead of chocolate.” Which is the way it should be.

It’s too bad YouTube didn’t exist 30 years ago or Matthew Shepard and other LGBTQ youth who had their lives taken from them in senseless acts of bullying, or took their own lives in fear of that bullying, would still be alive today.

YouTubers themselves are dumbfounded by their fame, and are also grateful for it

Jason Ahmad, co-founder of Epoxy.tv, a firm that works with YouTube performers to realize better social media returns, describes VidCon in this article as “Beatlemania with selfie sticks.” And that’s pretty accurate. We spent a lot of time just following the throngs of screaming teenage girls hoping to get a quick selfie with a YouTuber. Or at least yell, “Hi, I love you!”

If you don’t get it, you’re not alone. Even the creators themselves often say in their interviews, “X years ago I was just an unknown schlub like you and now I have a zillion subscribers and screaming teenage fans. It’s all surreal.”

Even the shyest, awkwardest kid in school can become an overnight YouTube sensation — after many years of hard work. Unlike Hollywood celebrities, many whom are groomed to feel entitled to be worshiped, and will snipe at any newcomer who threatens to knock them off their pedestals, the YouTube community is very gracious and encouraging about nurturing newbies.

YouTubers are redefining the celebrity machine and web user experience

Eons ago, a bunch of cigar-chomping Hollywood producers would comb through headshots and audition tapes of would-be stars and decide what the Next Big Thing would be, and market the crap out of them. It didn’t matter if they had actual talent. They would MAKE you like them.

In more recent history, back in the days of Web 1.0, marketing managers with a bunch of letters by their names, and hipster UI designers and developers with ironically dorky but insanely expensive glasses (non-prescription lenses, of course) would determine the next trends in web design. And as soon as we all adapted to them, the trends would change, as trends tend to do.

The VidCon generation is blowing both paradigms out of the water. Mainstream media is obviously beginning to recognize the power of this medium, because besides the aforementioned book deals, Grace Helbig has a show on E!, and a movie coming out with Hannah Hart (ElectraWoman and DynaGirl — yes, GenX, a reboot of the Sid and Marty Kroft Saturday morning cheesefest). Marketing mucky-mucks can spend millions of dollars analyzing why certain YouTubers are so popular. Or they can just strike while the iron is hot, and know that, like making a kid eat brussels sprouts, you can’t shove something down kids’ throats and make them like it, at least not for very long. Kids like what they like.

Regarding web user experience, while a user base may not have design or development skills, they will be very quick to tell you what is and isn’t working. Read the tweets and other comments!

The YouTube community is also doing something that hasn’t been possible in previous media — establish two-way communication with their fan base. It’s really not unusual for a YouTuber to retweet and directly respond to fan messages. They recognize the power of user reviews, but they also know how to deal with trolls, and inherently know the difference.

What does the future hold for these YouTubers? What is the next technological wave that iGen will glom onto? It’s hard to say. Even the YouTubers themselves say they are just enjoying the ride. One prediction: they will be the future talk show hosts.

I have to admit after all this, I like these kids and what they’re about, but still don’t understand the frenzy. But it’s not for me to get. My parents didn’t understand what we saw in Donny Osmond or Leif Garrett, either.