My Career – As Told in T-Shirts (and other Swag)

When I was cleaning out my closet this weekend, I found a drawer full of old T-shirts from companies I’ve worked for or with over the last 25 years. In looking at them, I realized they tell quite a story. (Please excuse the quality of the shirts as they’ve been sitting in a drawer for over 20 years. And, ok, I just didn’t feel like ironing them.) 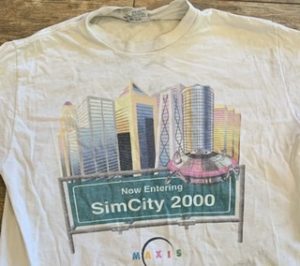 1. SimCity 2000: I joined Maxis in 1994, the year after the company launched this worthy sequel to the ground-breaking city simulation game, SimCity, which was released in 1989. 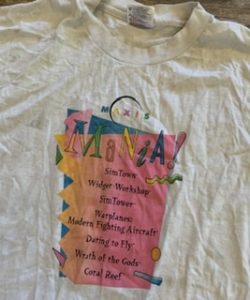 2. Maxis Mania! (SimTown, Widget Workshop, SimTower, and others): Riding the wave of success of SimCity 2000, Maxis released a series of games between 1994 and 1995. The games were attempt to branch out beyond the SimCity domain into other areas, including children’s and educational software. 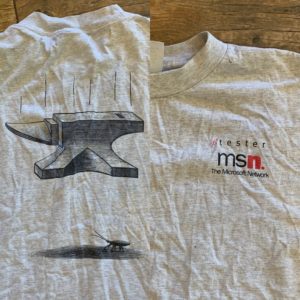 3. MSN Beta Tester: As Maxis’s first employee hired to specifically deal with online marketing, I maintained online forums on AOL, CompuServe, Prodigy and a few others. In 1995, we added Microsoft’s new MSN service to our mix. MSN was a game-changer in that it was one of the first online services to fully integrate web sites into their forums. Eventually, all online services would link web sites, and we could focus exclusively on Maxis.com, which also launched earlier in 1995. And as we know, MSN would merge with NBC to become what is known today as MSNBC.

By 1996, Will Wright, the original creator of SimCity, had been working on another ground-breaking life simulation game based in his experiences of rebuilding his life after the 1991 Oakland fires. Spoiler Alert: it would be another four years until that game, The Sims, would be unleashed to the world, becoming one of the best-selling video games of all time.

But back in 1996, Maxis had gone public the prior year, so Maxis had to move quickly and release other games to keep up profits. The production team was told in the spring that they would need to release four games for the 1996 holiday season. My roommate at the time was a QA tester and I hardly saw him at home during that cruel summer.

They managed to publish all four games right on schedule; but they were a disaster, partly because they could not properly tested in the time allotted. One of these games was SimCopter, which contained one of the most embarrassing bugs in the history of gaming. (Fun fact: I was a voice in one of the SimCopter ads in the game because I was working late one night and they needed a female voice.) 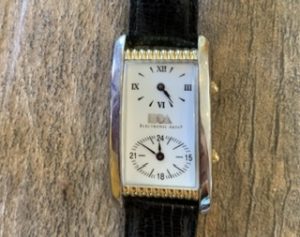 4. Electronic Arts: By 1997, after a stream of financial and critical flops, Maxis was floundering. That summer, they were bailed out by former competitor, Electronic Arts, and I transferred there as well. Surprisingly, I don’t have any T-shirts from EA, but I had a well-used EA Sports duffle (if you played any EA Sports games, you just read “EA Sports” in that voice, didn’t you?). I also got this watch, which simultaneously told time in two different time zones, one in military time. This came in handy when I had early morning conference calls with Bullfrog’s UK team. 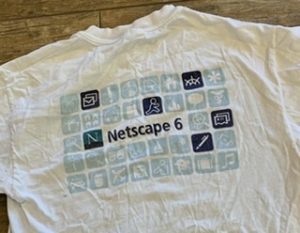 5. Netscape 6: I left the game industry in 1998, and started as a Producer at Netscape in early 1999. In the 90s, Netscape was an industry leader in web browsers, but by 2000, it was rapidly losing market share to Internet Explorer.

Netscape was also rapidly losing employees because the dotcom boom outside Netscape was heating up and many left to seek their gold in them thar Valleys. Many others who had been with Netscape since the early days were seeing their stocks soar, cashed out and called it quits.

For those of us who remained, the show had to go on. Due to Internet Explorer 5 already being on the market, Netscape 5.0 was scrapped and they went directly to Netscape 6. Netscape 6 contained, among other features, an email program and a Netscape-branded version of Instant Messenger. Despite these features, the release flopped.

In 2001, Netscape, which had already been acquired by America Online in 1999, was swept up in the AOL/Time-Warner merger. I was laid off shortly after, along with many others. 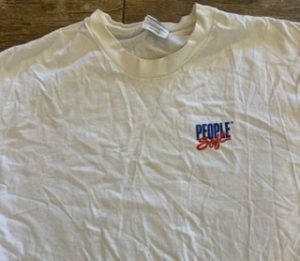 6. PeopleSoft: I bounced back quickly from my Netscape layoff, and joined PeopleSoft in early 2001 as a Web Producer for the Financials products. The company had taken a downturn, but PeopleSoft had just released version 8.0, which was the “No code on the client” release. I was also excited because, after enduring mind-numbing hour-long+ commutes into Silicon Valley for four years, the PeopleSoft campus was only 10 minutes from my house. 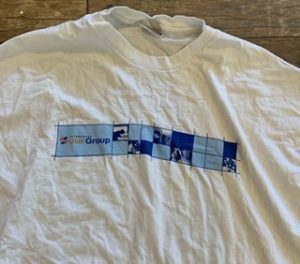 7. Interwoven User Group: In early 2002, my team at PeopleSoft migrated the web site over to a new CMS called TeamSite, which was owned by Interwoven. TeamSite is now owned by OpenText.

So things were looking good, but there was still the undercurrent of a shift. Even after a year at PeopleSoft, I started to see the corporate culture change from T-shirts and jeans to polo shirts and Dockers.

Then in mid 2002, when I was seven months pregnant, I was laid off along with 300 other employees. In 2005, PeopleSoft was acquired by Oracle.

After the birth of my daughter in October 2002, I took a break from the corporate world and freelanced, building web sites for smaller companies and raising my daughter. 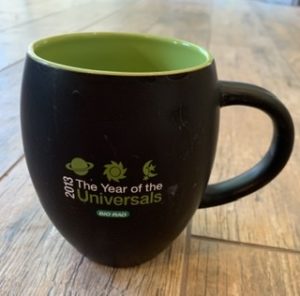 When I started at Netscape and would get anxious about launches, my supervisor would help me keep things in perspective by saying, “It’s just a web site; it’s not like we’re curing cancer here.” The irony of working in biotech was that the companies actually are developing products that could be instrumental in curing cancer.

Looking back, I’ve interpreted my Netscape manager’s words to mean that with enough time and perspective, many of the things that elevated our our blood pressure  become less consequential. And even if the company takes a nosedive and we lose our jobs, we can still take what we learned and move forward.